In order not to occupy your time for a long time and help to quickly understand how matter is arranged, I propose the following test in which you make the right decision yourself.

Option 1. The atom as a nucleus with electrons (see Fig.1)

Here is an excerpt from the definition of the metal chemical bond (see Fig. 3a): “When a crystal lattice is formed, the metal atoms approach each other until touch, and then the valence orbitals of neighboring atoms overlap…”. Next, we look at the micrograph of germanium (Fig. 3b) and see that there are no touches of atoms in it, although it is also a metal, black dots are atoms with electronic orbitals (not to be confused with nucleuses, since the latter cannot be registered). Thus, the MP hypothesis did not coincide with reality.

How, then, does metal chemical bond is carried out according to the MP? Especially in cases where a copper plate is a busbar attached to an electrical generator of a power plant, through which an electric current of hundreds of thousands of amperes flows (Fig. 3a), and why it does not carry away free electrons with them, and why metals lacking electrons are not evaporate?

Apparently, the question belongs to the rhetorical category! It is also interesting, how is the chemical bond between the nucleons in the nucleus of the atom carried out?

Now let’s look at the formation of β+-, α–-, γ–-particles, photons that have particle and wave properties, and also ask ourselves, from where does heat appears at the atomic explosion. It all comes down to the simple idea that all the particles and heat appear as a result of the liberation and absorption of energy in the transition of the electron from orbit to orbit, etc. From these statements it follows that solid particles are energy. Note that this statement is correct, but the question remains open, why these particles move, if they have no engines. For example,

according to MP, light can move across the entire galaxy. It might seem that the answer gives confirmation that the particle is both a wave.

However, for wave propagation special media are required, and it is here that all views are destroyed immediately, because all particles propagate in all media, without disturbance the given media, for example, light propagate in a vacuum, gaseous media, liquids and crystals.

What is heat in the MP – no definition. There is no definition, and what is the temperature. There is also no general definition of what is the energy in MP. Probably, , it is easy to come to the conclusion that the atomic structure of substance is a soap bubble, regardless of nuclear energy industry and other achievements, because another model (Option 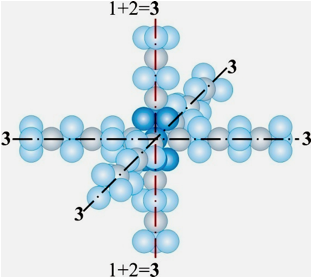 As you can see, we do not need to invent sticks in the crystal lattice; their role is played by the needles of chemical elements according NS.

Let’s look at the internal chemical bond in a particular chemical element in NS.

Let us recall that magnetic clasps – ‘Velcro fastener’ are generated automatically as soon as external compression of parallel neutrino magnetic field lines (MFL) took place, regardless of their motion direction.

Looking at Fig. 8 we see that there is a multitude of MFL compression zones in the chemical element, they keep the structure from damage and allow constructing the crystal lattice of any kind, even the most exotic.

Let’s clarify the mechanism of magnetic bond in the form of a ‘Velcro fastener’.

THE MECHANISM OF ALL TYPES OF CHEMICAL BONDS

Now let us consider the mechanism of all types of chemical bonds –it is common, a magnetic one (see fig.9).

We pass to external chemical bonds between the chemical elements.

The metallic chemical bond of a pair of needles will have one magnetic clasps – ‘Velcro fastener’, the length of which can change.

Thus, all the chemical bonds regardless of their type are magnetic clasps – ‘Velcro fastener’.

Extremely the chain of appearance of energy carriers – β+-, α–-, γ– – particles, electrons (e–-particles) and needles of chemical elements is interesting. All particles are generated by surface chemical elements of solids and liquids.

Let us consider the mechanism of formation of the β+-particle – graviton (it is an elementary particle of the magnetic field line – MFL).

Where do gravitons and electrons come from? Gravitons are generated after formation of α––

particles on the free needles of surface chemical elements of the bodies after they are torn out by oscillating heavy α–-particles from their lattices with the break-down of chemical bonds (see Fig.11), thus, many bodies made of different chemical elements may produce gravitons. 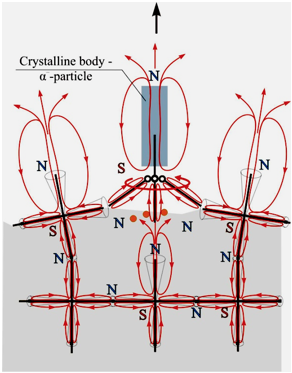 elements from the surrounding gas media, α–-particles (a magnet with a body).

Slow (α–) and fast (е–) electrons are obtained from gravitons, and electricity can be ‘ferrous’, ‘golden’, ‘silver’, ‘uranium’, etc., depending on which chemical elements the graviton was formed on.

Since all chemical bonds in nature are magnetic, all particles can connect magnetically to each other, forming other particles – energy carriers, for example, α–-particle and γ–-packet, depending on the docking place at the poles of α–-particles, can form either a graviton – β+-particle (β+ = α– + γ–), or an electron – e–-particle (e– = α– + γ–), i.e. the graviton and the electron are transformers (see Fig. 12).

Under certain conditions, all of the above energy carriers and their temporal combinations are broken into smaller structures (needles and cords of light, the SU), as well as into neutrons and neutrinos (for the II parallel world – the ‘dark matter’), which become heat carriers.

Let us pay attention to the fact that from the point of view of NS the Universe has a plurality of parallel worlds built on the same principle, but using different initial carriers: the I world uses the neutron, the II the world – the neutrino (dark matter), the III world – the superneutrino, etc.

Direct confirmation of the truthfulness of the representations of the Neutron Sciences is a micrograph of the diamond crystal (see Fig. 13 and Fig.14)

Let us consider types of thermal ions according to NS (see Fig.15): 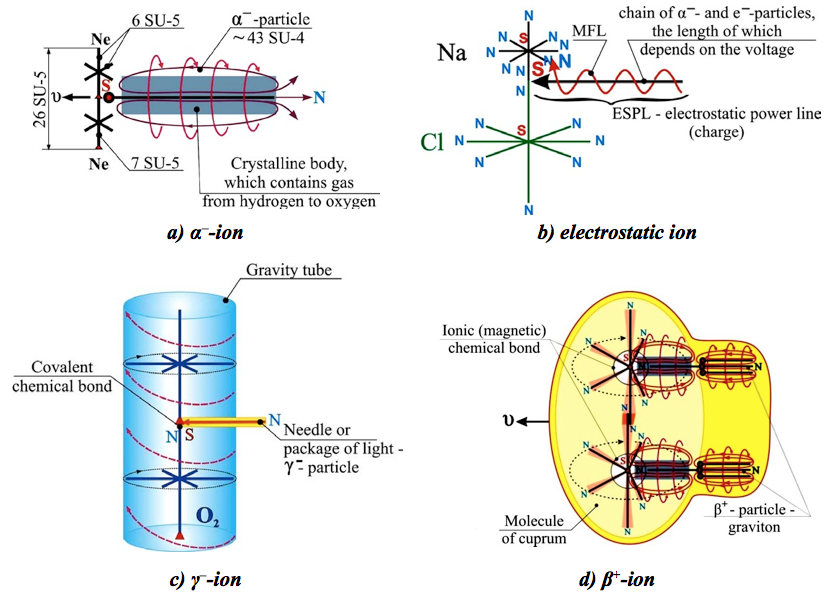 If you’ve been paying attention to the structure of α- and β + -particles, then in the magnet of α-particle there are dozens of types of small chemical elements. Therefore, experiments on obtaining primary protein compounds in water, the so-called “primordial soup”, under the influence of high-voltage discharges in a gaseous medium (ammonia + methane + hydrogen) was dirty. Helium, lithium, nitrogen, oxygen and other small gases from magnets of α-particles did not take into account.

Diamond is also not “crystal clear”, since thermal ions from small gases that form hexagon tubes in diamonds are not taken into account.

The semiconductor is heated only when it is locked, i.e. when electrons are redirected perpendicular to the tubes, on whose faces they are broken, increasing the density of thermal carriers in the form of needles of chemical elements.

We also note that the crystal lattices of liquids and solids have internal atmospheres from the ions of gases and vapors, and it excludes the production of pure chemical elements in the volume of a liquid or a solid.

In modern science, a pure chemical element and a pure substance are equated. Because it is impossible to separate a pure chemical element today (and in the near future), all attributed properties are determined through a substance that is “dirty” because of the presence of an internal atmosphere and ion tubes. Thus, the statement of the MP on the existence of a connection between the position of an element in a periodic system and its chemical properties is erroneous.

According to NS, heat is vibration or chaotic motion of thermal ions in the crystalline lattices of bodies, liquids under the action of its own ‘engines’.

According to NS, temperature is a bulk density of all types of energy carriers, including thermal ions, in solids, liquids and physical medium. The higher this density is, the higher the temperature.

We return to the question of electric charges.

The term ‘charge’ had appeared after the use of gunpowder in the first types of firearms.

A charge of compressed gunpowder after his ignition – this is an explosion with a shock wave and the destruction of the chemical elements to the needles, which are carriers of light and heat and promote the increase of temperature and of the gas volume.

Fig.16 shows that the substance lattice in the form of honeycombs has 50% of free needles of chemical elements that capture chemical elements-gases of the intracellular atmosphere by means of the ion (magnetic) chemical bond and build the bodies of α–-particles. It is obvious that the substance can produce the largest quantity of α–-particles, as compared to the other particles, since in this case the entire lattice volume operates. And β+-particles are ranked second in terms of quantity of particles consisting of the same substance, as they are formed only on its surface from the superficial chemical elements.

The third place in terms of particle number is taken by γ–-particles, as they appear after the fracture of β+-particles into α–-particles and γ–-packages.

Enrichment of uranium oxide – it is an increase of the number of α-particles in its crystal lattice due to small chemical elements-gases. For example, enrichment of fine- dyspersated uranium oxide can be accomplished by placing uranium oxide in a chamber with high pressure gas. Then, this enriched powder are compressing in tablets, which are placed in fuel rods of nuclear reactors.